The current delegation of World Scouting in Qatar includes Lars Kramm from Germany and Mohamed Salih from Sudan, supported by a staff member of the World Scout Bureau. The WOSM Delegation at CoP18 shares an exhibition space with the World Association of Girl Guides and Girl Scouts (WAGGGS). The exhibition booth has been a useful opportunity to connect with Scouts from other delegations, and at the same time, to talk about Scout initiatives to those who were not aware of the strong connection between Scouting and the environment. 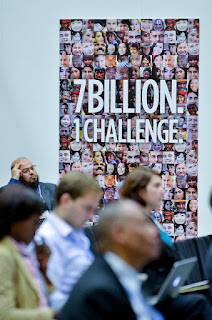 World Scouting’s team at CoP18 has been participating actively in several discussions and side events, particularly in (but not restricted to) platforms and networks for young people, to have their say in the Conference processes. The team is also promoting all the good work that is being done by Scouts around the world to help reduce the effects of climate change at the grassroots level, and also through initiatives and programmes at various other levels.

Nature and the environment are central to Scouts, particularly since a majority of activities in Scouting are conducted outdoors and in the midst of nature. Hence, the protection and care of the environment is of utmost importance for the effective continuance of Scouting. In recent years, World Scouting has been promoting the World Scout Environment Programme (WSEP) and Scout Centres of Excellence for Nature and Environment (SCENES) to support National Scout Organizations (NSO) in offering environment education to their member Scouts. In addition, WOSM has been engaging with partners from various UN agencies, the civil society, private sector and donor organisations to further strengthen NSOs work in this area.

The WOSM Delegation in Qatar has also been meeting with Scouts at CoP18 who are currently representing other organisations, agencies, and institutions, with the aim of building a network of Scouts from around the world who are playing an active role in the climate change agenda. It has been seen that many top leaders, from different walks of life and present at the CoPs, have a Scouting background and are proud to showcase their connection with Scouting and freely express how it has influenced or inspired them to become professionals and academicians in climate change and related subjects.