”Association des Scouts du Burundi (Burundi Scouts Association) aims to put the images of a troubled nation, a reminder of violence and the civil war, behind, and is hosting the 6th Africa Scout Jamboree starting today up to 5th August 2012. Although the war and civil disturbances were officially ended in 2005, rebuilding of the societal peace has taken a long time and Scouts have played a significant role towards this, not only in Burundi but also all over the Great Lakes region around Burundi through the well-known “Amahoro Amani” initiative by Scouts. Under the banner “Scouting for a positive change”, the 6th Africa Scout Jamboree is set to offer an experience of a lifetime for the participants, in a country that, despite its “not-so-rosy” recent past, is fondly referred to as “the heart of Africa”.

Even in the heart of the civil war, Association des Scouts du Burundi (ASB) was one of the rare local Non-Governmental Organisations that remained the anchor of peace and unity in the country, offering a common platform for all Burundians to come together, regardless of the their ethnic and social backgrounds, to discover themselves, appreciate each other and work together for the development of their country and more importantly the reestablishment of peace.

The Amahoro-Amani Project, a joint initiative of Scouts and Guides organisations from Burundi, Democratic Republic of Congo (DRC) and Rwanda, has been actively contributing to bridging the ethnic divides in the Great Lakes region. Burundi Scouts themselves have done very well through the establishment of 112 Amahoro Amani youth peace clubs across the country, the members of which act as community mediators. This has not only gained Burundi Scouts the popularity, but also an acceptability and respect throughout the country.” 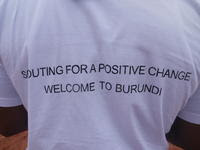